Quick Links to Info on this Page:

How do you spend time at your tailgate party or your pre-game cookout? Let me introduce you to the fastest growing game around…Baggo!!
Some people might call it corn hole, bag toss or even tailgate toss. no matter what you call it, it is a must have at your Alabama football party!
See All Alabama Crimson Tide Cornhole Games Here

The best part of owning this ‘Bama bag toss game is that even the other teams fans at the party have to throw into the Alabama hole!
Don’t be bored at your next get-together, be the life of the party when you break out your own Alabama Baggo game.
[sc:cleanupcode ] 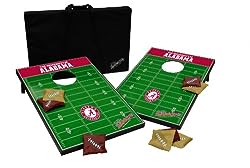 My wife bought me this bag toss game for Father’s Day a few years ago. Every Mother’s day and Father’s day we invite several friends over to cookout, swim and socialize. We have also started a cornhole tournament that has become the main attraction of the day.

We play a double elimination tournament and lets just say it gets very competitive! We play by the ACA rules of play. We offer a trophy and a cash prize for the winning team and lessons for the first team eliminated!! The ACA has over 30,000 members and is free to join.

If you would like to build your very own custom cornhole boards there are great instructions here.

This Alabama bag toss game comes with BAMA on the bags, a built in scorekeeper and storage for all the game supplies under each board.
Roll Tide Roll!!
[sc:cleanupcode ]

Playing bag toss is a great tailgating game. Small children as well as adults can play this game that is similar to horseshoes. My family has spent hours in our backyard playing this game.

Boards latch together and have handles for easy carry. Perfect for the tailgate, beach or barbeque. 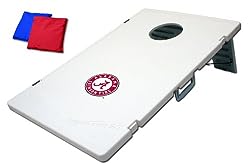 Hope your family isn’t as competitive as mine – it’s gets pretty rough around here when we play. We all have our game faces ON!
[sc:cleanupcode ] 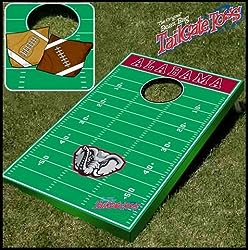 Love the football field look of this cornhole set – and the bean bags are designed like footballs as well.

We might have to get this one, too (someone tell my wife…haha!)
[sc:cleanupcode ]

Whether you have an Alabama bag toss game and need replacement bags or one without an Alabama logo that you want to customize, these bags are for you.
[sc:cleanupcode ]

How to play Cornhole

info on this page